To celebrate the centenary of her birth, Maurice Lambert’s statue of Margot Fonteyn at White Lodge has been restored by specialists Hammond & Hammond.

Hammond & Hammond carefully restored Margot’s bodice, tutu, eyelashes and the plinth which she stands on. The funding for the restoration of the statue was generously donated.

The bronze statue of the famous ballerina was created by Maurice Lambert in 1954. The sculptor was the brother of Constant Lambert, Founding Music Director of The Royal Ballet.

The life-sized statue was shown at the Royal Academy Summer Exhibition, 1954. Since then it has graced the entrance to The Royal Ballet School, White Lodge.

It is a tradition for all students (and visitors) of the School to rub the statue’s left forefinger to bring them luck.

Margot Fonteyn DBE (1919–1991), was christened Margaret (‘Peggy’) Hookham. She became a pupil of the Vic-Wells School in 1934 and joined the Vic-Wells Ballet later that same year.

After Markova’s departure as the Company’s leading ballerina in 1935, Fonteyn, who was gifted with perfect physical proportions and great artistic adaptability, assumed the position at an unusually early age.

In his 1936 ballet, Apparitions, Frederick Ashton created the first of many leading roles for Fonteyn, which revealed her innate musicality, lyricism and purity of line.

Fonteyn’s long career can be measured by three great and contrasting dance partnerships, which marked its progress: with Robert Helpmann (from 1936), Michael Somes (principally from 1946) and Rudolf Nureyev (from 1962).

Fonteyn reached iconic status in her partnership with Nureyev, who had defected from the Soviet Union in 1961. Their extraordinary partnership saw Fonteyn’s career extend well into her fifties.

Named Prima Ballerina Assoluta of The Royal Ballet in 1979, Fonteyn remained the supreme ballerina of her generation, and Ashton’s greatest muse.

Our thanks to Hammond & Hammond for restoring the statue and the generous donation that enabled this to happen.

Find out more about Margot Fonteyn 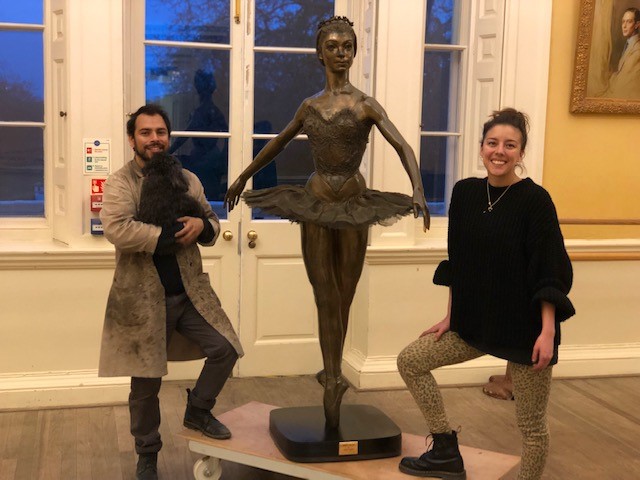