‘Respect the past, herald the future, but concentrate on the present.’

Our Ballet History Timeline is an online tool that relates to the wider history of Classical ballet as a theatre art form.

Set out as an easy-to-explore linear chronology, the Timeline is illustrated by archival treasures from The Royal Ballet School Special Collections, allowing these wonderful items to be seen online for the first time, and appreciated within their proper historical context. 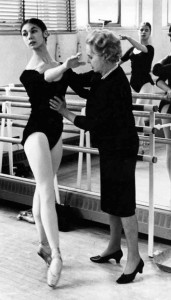 Founding of the School

The School was founded in 1926, when Dame Ninette de Valois opened her Academy of Choreographic Art. Inspired to create a repertory ballet company and school, she collaborated with Lilian Baylis, lessee and Manager of the Old Vic Theatre.

The first five younger years of the School moved to White Lodge, Richmond Park in 1955/56 and became residential, combining general education and vocational ballet training. The final three years of study for older students continued to be based at Barons Court.

From that time the School has become both the leading classical ballet school in the United Kingdom earning government support and an international institution which attracts the very best ballet students worldwide. The calibre of students graduating from the school is self-evident – see our list of notable alumni.

In January 2003 the Barons Court campus moved to new premises in Floral Street, alongside London’s Royal Opera House in Covent Garden. The state-of-the-art studios are now linked to The Royal Ballet by the award winning Bridge of Aspiration, fulfilling Dame Ninette’s dream to have Company and School side by side in the centre of London.

Be a part of our future

If you have any comments or questions about our Special Collections or Ballet History Timeline, please contact us: [email protected]
Shopping basket